Consult this FireEye report for a prose description of malicious actors from Iran targeting governments and commercial computers.

Download the free STIXViz tool and open the STIX version of the report.

Distribution is unlimited because the data markings do not include TLP or other restrictions.

The Threat Actor is identified as Ajax Team, who appear to be based in Iran. Their activities are characterized as Medium Sophistication which reflects later analysis indicating their use of customized malware implants and control infrastructure along with an unencrypted communications protocol. 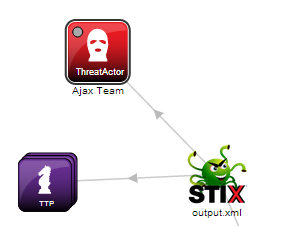 Actor attribution was given Medium Confidence indicating that the vendor was not able to definitely tie the actor to a given country, but was “believed to be” associated with Iran.

Several indicators are included in the report, to capture each resource used by the actor.

Since victims were anonymized, there are no historical Incident details, but rather individual Indicators used for proactive detection. 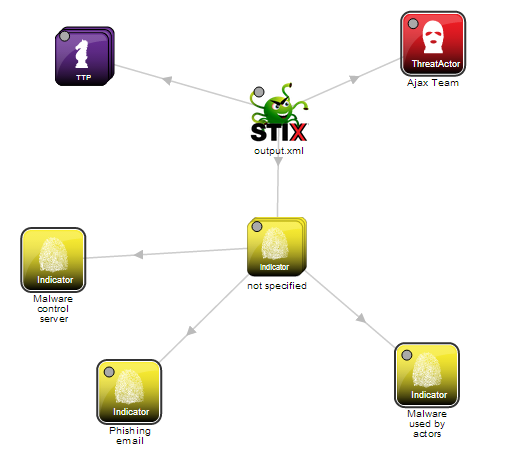 The Email Indicator suggests that the sender email address invite@aeroconf2014.org should be blocked unconditionally, as the sending domain is owned by the malicious actors. “IEEE Aerospace Conference 2014” is a suspicious subject line seen in those emails, but may also include legitimate emails.

Under the File Indicator a malware sample named ‘IntelRS.exe’ has been seen with several hashes, which can be directly added to a blacklist.

The malware used an installation filepath that was fairly unique, and can be used as a trigger for generic detection as well.

Domains are owned by the malicious actors, and linked to the IP addresses resolved at the time of analysis, which appear to be hosted on an overseas provider. Firewall blocks and DNS filters can be used to prevent access to those without much issue.

The actor sends phishing emails to unsuspecting victims, a behavior captured under Observed TTP, which is given a Relationship to each malware sample and control server included in the report.

In order to re-use the TTP in other contexts, it acts as a stand-alone object linked to the Actor

Note: The current version of STIXViz does not display reports.

All of this information is wrapped up into a Report structure to parallel the paper report that FireEye released. It contains information like the report title, description, intent, etc.

Sharing this data with others

Say you find an instance of the malware in the course of investigations, a Sighting of the Indicator can be created with a reference to the observed data. An instance of this might appear similar to this.

Methods to detect this Threat Actor activity can be added under a Indicator entry, for instance A YARA signature as a Rule attached to a Test Mechanism.