Relationships are one of the features of STIX that make it so powerful for expressing cyber threat intelligence (CTI) when compared to other options. Although each of the major components is valuable on its own and can be used independently of the others in order to express those concepts, the true power of STIX is realized when components are used in conjunction with each other to better enable contextual understanding for threat analysis. It’s one thing to use STIX to describe an indicator for an IP address without context, it’s another to relate that to the relevant TTP that it indicates, the TTP to the threat actor or actors that are known to use it, to the incidents where it was observed, and to courses of action that can help mitigate its impact.

STIX relationships enable all of this by defining these connection points and how to express them: 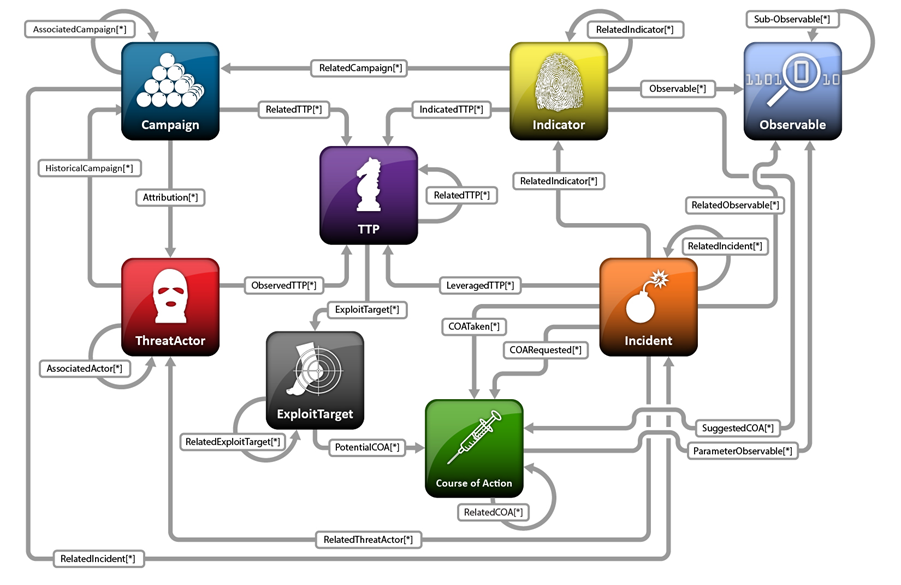 It should be noted that not all relationships in STIX are about simply conveying that two completely independent things are associated to each other. In real world CTI, relationships between the concepts represented by the STIX major components actually take on one of two flavors: association or composition.

When a relationship is specified, the related component can typically be defined either embedded inline within the primary component or via a reference to a definition elsewhere. It is important to note that a relationship’s nature (Association vs Composition) can typically be considered orthagonal to and independent of its specification approach (referencing vs embedding). Most association relationships (e.g. a Threat_Actor with a related TTP) can be specified either via embedding (e.g. defining the TTP inline within the Threat_Actor/Observed_TTPs structure) or via referencing. The same can be said of composition relationships. There are a small number of relationships in STIX (e.g. Related_Campaigns within Indicators) that are exceptions to this rule and can only be specified via reference due to their pure association nature.

While a relationship’s nature (Association vs Composition) is inherent in the form of information it represents, its specification approach is a choice to be made with varying tradeoffs. For more information on relevant suggested practices see Suggested Practices: Referencing vs. Embedding.

In XML, a basic STIX relationship structure looks like this (the relationship is “Indicated_TTP”, which goes from an indicator to a TTP):

The Confidence field uses the STIX confidence mechanism to express confidence in the relationship assertion. For example, if the producer is not certain that a particular TTP is used by a Threat Actor they could use “Low” confidence to denote that.

The Relationship field uses specifies a semantic label for what kind of relationship is being asserted. This value can be ad-hoc or reference a value from a STIX controlled vocabulary. Although no default vocabulary has currently been defined, the STIX community is currently soliciting input on potential vocabularies.

If using that field as a reference, the idref field is used to point to the id of the construct that the relationship is to. Optionally, the timestamp field can also be used to create a reference to a specific version of the construct.

In the example above, a reference is created by setting the idref of the relationship TTP to the id of the TTP related itself. Note that while the TTP definition requires the xsi:type, the TTP reference does not because it only uses the idref field. It could also have added a timestamp set to exactly “2014-03-31T00:00:00.000000Z” to indicate that the relationship applies to that specific version of the TTP.

Assuming that you’re using a full relationship structure, you can also choose to embed the related component:

In this case the TTP is not defined separately at the top level, it is included in full inside the Indicated TTP. When embedding another component it does require using the xsi:type (because the full TTP model is being used) and allows (but does not require) the use of id and timestamp to give the construct and ID.

Use of Relationship Field

Use of Confidence and Information Source

Many (even most) of the use-case driven idioms show specific examples of STIX relationships: